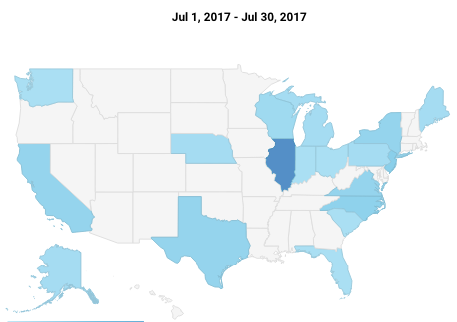 This past month has been pretty busy with us, so let me apologize for our lack of blogging. Recently, we released Quandary EP; our 2nd release following Juxtaposition EP (Released July 2016). In our effort to bring you more music, we’ve already started recording our next EP which features some of our more memorable tunes (“Cut the Shenanigans Britt” and “Crush on Me”).

In addition to recording, College Transfer Student is in the process of filling a new band lineup so that we can start gigging again, come Spring of 2018. The new band lineup will include drums, bass, synth, and if we’re lucky we’ll be able to add female vocals to the project. So if you know any talented musicians in the Chicagoland area, please send them our way.

Throughout August, we’ll be working on our new EP and creating media content (photos, videos) that’ll be used to promote the next release.

For July, we did a handful of things to improve our overall appearance in the search engines; this included optimizing page speed by enabling browser caching and gzip compression.  We also updated our WP plugins to help maintain site speed and security.  Aside from site development, we began configuring our online band merch shop by integrating Printful, WooCommerce, and Stripe that will allow us to drop ship any orders we receive online.  Quandary EP was also released through CD Baby which aggregates our music to several platforms including: iTunes, Spotify, Amazon Music, etc.

This configuration includes integrating WooCommerce, Stripe, and Printful that’ll allow us to drop-ship all orders taken via our band website or on our Facebook page.

This new EP includes some of our best tracks including:

This month, our audience decreased slightly by 0.29% with Twitter continuing to be the most popular channel, but losing 27 followers.  In Contrast, The Just Luckies, an all female band from Chicago, gained 67 followers.  Compared to competitors, Twitter is our strongest channel and makes up a large majority of our audience.  Our Facebook page is relatively low amongst the competition and needs to increase it’s audience, along with engagement.  We’re in the process of developing a solid social advertising strategy that’ll be implemented in the next few months.

Channels that gained the most engagement since last month were YouTube (+44) and Google+ (+25).

Facebook gained 1 Page Like this month and gained nearly 22% more reactions.  Post shares dropped by 22% which may be due to changes in our posting strategy.  Engagement Rate dropped less than 1% compared to June.

In total, 65 posts were published to Facebook (+1.5% more than last month) including: 24 Links, 19 Photos, 18 Videos, and 4 Status.  Videos had the greatest Engagement Rate compared to the others.

Twitter Engagement didn’t do as well this month, with Likes, Retweets, and Replies not showing any gains.  Total Engagement dropped 68% compared to June.

In July, 81 Tweets were published to Twitter including: 64 Links, 15 Photos, 1 Status, and 1 Video.  There was 43 less Tweets this month which may have caused Engagement to decrease.

Traffic increased over 100% this month with an unusual spike occurring July 26th, which was most likely caused by spam traffic.  Both, Bounce Rate and Avg. Session Duration metrics increased this month which illustrates user experience (UX) is improving.  Rather than emphasizing traffic growth, our goal is to improve UX and customer retention by monitoring and improving metrics like Bounce Rate, Avg. Session Duration, and Pages/Sessions.

Referral traffic was the primary source of traffic for the month of July, however this isn’t an accurate depiction of traffic.  After reviewing the sources of the Referral traffic, we found that 84% was coming from spammy websites (coming from Russia).  We’ve added these sites to our spam-block list and we expect Referral to be down next month due to the changes.

The main source of traffic in actuality was Social with Facebook being the lead source, followed by StumbleUpon.  Although, Pocket appears to be the main source, this channel distributes articles through Buffer which then distributes the posts to Twitter, Facebook, Google+, LinkedIn, etc.

We’ve recently began a new strategy for posting that’ll implement UTM tracking to URLs.  This will allow us to closely monitor where traffic is coming from and analyze the impact of each post.

The top states that traffic is coming from is Illinois, New Jersey, and North Carolina.  Illinois remains the primary state with Vernon Hills, Evanston, Lindenhurst, and Chicago being the dominant cities.  Traffic in Illinois increased 30% compared to last month and we hope to see this number improve over the next year.  Our main focus are states in the midwest and also states that have a flourishing music community.

This month our conversion rate is at 7% and these are the following goal completions:

Newsletter Signups are the most crucial KPI right now, since it’ll place each new fan into our funnel which in-turn will improve retention, reach, and acquisition.  Regarding CRO (Conversion Rate Optimization) we’ve begun looking into different softwares that’ll allow us to A/B test our website to increase conversion rate.  These include Google’s Optimize and Optimizely.  Before we can effectively use the software we’ll have to first setup our ecommerce platform on the website, which we plan on having ready by September.